Wearable KFC: The Donald would love it. It's in our round-up this month.

In 2016, the best food content promotes people and places more than the food itself. Why? Well, it’s easy to put people and places in video content and have them connect with viewers, for one thing. And food is inexorably linked with people and places anyway. That’s why you have Canadian prime minister Justin Trudeau talking about Canadian food on YouTube and this video of food foraging in Newfoundland.

For a few brief, glorious hours in August, you could order a free bottle of sunscreen from KFC that smelled of their chicken. Dubbed Extra Crispy, the bottles went fast. Despite the quick nature of the promotion, it remains effective content marketing largely because we’re still talking about it. It helps that the site itself is hilarious. And for those of you having déjà vu: earlier this year KFC did nail polish that tasted of their chicken. It was called Finger Lickin’ Good.

The vast majority of fragrance ads are terrible (example here). This new video from Kenzo, however, perfectly subverts the formula used by the entire category. It’s weird, wonderful, and reminds us of that Fatboy Slim video where Christopher Walken flies around a hotel lobby.

Lots of people have been wondering how Trump’s weird presidential campaign has been affecting his various properties. Foursquare, the most essential search-and-discovery app going, has an answer for you: not well at all. Data journalism is growing in popularity, and if there’s one thing Foursquare has in abundance, it’s data. So they’ve helpfully explained how Trump’s campaign has affected Trump businesses, as you can see from this graph. Note: Kuration’s home base Toronto has hated the Trump brand since before it was cool. 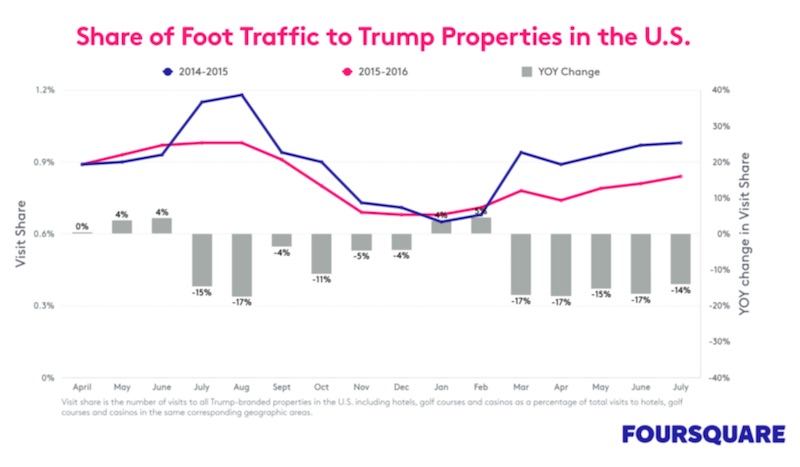