This month we've got real tear-jerker of a video that rivals the first few minutes of "Up".

This month, ASOS ran an impressive user generated content campaign on Instagram, Twitch is streaming Doctor Who, and a Brazilian hospital launched a tear-jerking video. Oh, and Deadpool did a bunch of stuff, but we’ve already written a couple of Deadpool content marketing articles, so we’re limiting ourselves to the biggest thing he did this month.

User generated content can be a tough beast to master, but fashion brand ASOS is doing it well with their #AsSeenOnMe Instagram campaign. It’s pretty simple. ASOS customers take pictures while wearing ASOS clothing, tag the post with #AsSeenOnMe, and then ASOS chooses the very best images to feature on their feed. This is exactly what user generated content needs: heavy curation by the brand in question. Note that they make sure to include product numbers. 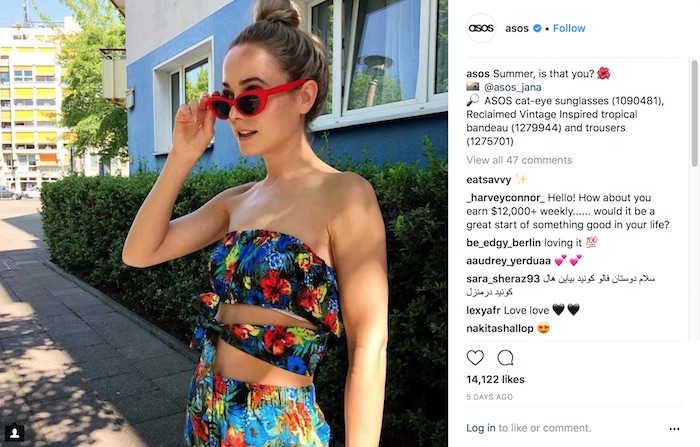 Last year, we wrote a bit about how a soundtrack can be content marketing. This is another good example. Celine Dion features in the Deadpool 2soundtrack, so the filmmakers released a music video featuring an amazing performance by Dion, sexy dancing by Deadpool, and some witty banter at the end. This video hit number one on YouTube Trending, picked up millions of views, and sent the internet into speculative overdrive concerning the identity of the dancer playing Deadpool in heels. It was Yanis Marshall, by the way.

Twitch is still primarily known as a video game streaming platform. That’s something the brass at Twitch are trying to change, so they partnered with the BBC to stream 500 classic episodes of Doctor Who. The Whovian fandom is massive, so no doubt more people will start associating Twitch with television streaming.

If there’s one thing Pixar is known for, it’s putting a whole lot of plot and character into one short, emotionally-charged, wordless segment. What part of Up do you remember? The first ten minutes.

Well, a Brazilian hospital is trying the same approach, and it’s pretty effective. The Barretos Cancer Hospital is changing it’s name to the Hospital of Love, and they’re promoting the change (and fundraising) with this tear-jerker of a short video. Don’t say we didn’t warn you.