This month: Adobe releases a sarcastic clothing line, Starbucks wants to remind us that America is already great, and a wise-cracking, undead-slaying misanthrope with a chainsaw for a hand is running for president. And then there’s Volvo.

If there’s one problem with stock images, it’s that most of them suck and you have to spend a lot of time cutting wheat from chaff. Adobe wants to solve this problem with their own stock images business, Adobe Stock, which is all about not featuring terrible images. And to highlight this fact, they’ve released a clothing line featuring some of the worst stock images ever conceived. Man at desk frustrated by technology? Happy office workers pointing at a blank sign? Laughing woman eating healthy vegetable salad? Here’s the look book. 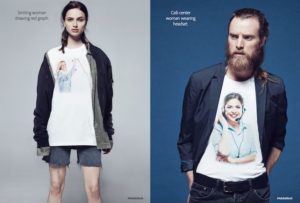 Think that the news is too bleak? Starbucks agrees with you, so they’re launching their own content series called Upstanders. “When we turn on the news or scroll through our social media feeds, we are inundated with stories of discord and dysfunction,” says Rajiv Chandrasekaran, the series producer and former senior editor at The Washington Post. “But there is more to America than that. In cities and towns across the country, there are people who are courageously, selflessly, collaboratively, and thoughtfully creating positive change.” The series will be promoted through Starbucks’ app and their in-store WiFi.

This year’s American presidential election is a dumpster fire. Capitalising on that fact, Starz has launched Ash4President, a faux-Presidential campaign to promote their hilarious series Ash vs. the Evil Dead. Campaign videos? Yes. Posters? Sure. A bunch of downloadable stuff tailored for social media? Yep. Although somehow, campaign videos featuring a profane dude with a chainsaw for a hand are less silly than the real-life presidential campaign.

Ikea Gets a Lifestyle Blog

There are thousands of lifestyle blogs out there, so why would Ikea skip the usual promotional rigmarole of offering independent bloggers free stuff in exchange for (hopefully) a polite mention? Because with their Sustainable Living Project, they can better control the conversation. Basically, Ikea recruited some of their customers who wanted to live more sustainable (save energy, waste less, live a healthier lifestyle, and/or save water) and offered them some free Ikea swag in exchange for blogging about how they use said swag in pursuit of their goals. Want to read a blog from someone with a similar lifestyle to you? You can sort entries by houses vs. apartments, and by living situation (i.e., single, family, couple, co-living). The result is something like an Ikea-specific Pinterest.

Most car commercials want you to see a car that’s bright shiny and new. Volvo has taken the opposite approach with slow-speed videos of their crash tests. There’s nothing traditionally enticing about this; they show a frontal offset at 40 mph, a side impact at 35 mph, and a rollover at 30 mph. Ugly and scary? Sure (turn your volume up to 11 for full effect). But it’s also the most visceral example of safety out there.