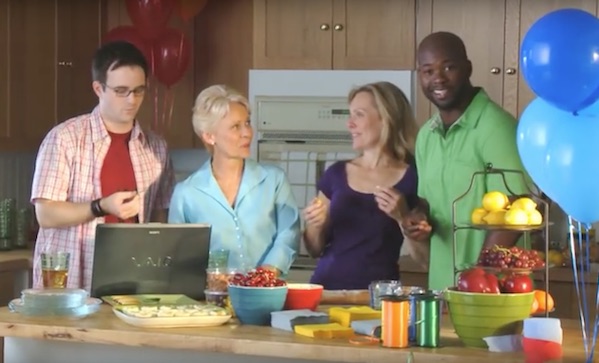 2009 was a particularly bad time for Microsoft. And for their content marketing.

2009 was a particularly rough time for Windows marketing. The “I’m a Mac / I’m a PC” ads were making people laugh and cemented Mac’s position as the cool tech company. RIM had the business professional market locked up tight. Sony was putting up a massive fight in the console war, dominating the exclusives race.

So, how did the beleaguered tech giant choose to launch Windows 7? Well, they encouraged Windows users around the country to host their very own “launch parties” to celebrate the new operating system.

See how far you can last though this video. Side note: notice the documentary style zoom-in zoom-out thing that was super popular at the time, thanks to Battlestar Galactica.

First of all, yes, it’s real. You had to apply through a website and according to Microsoft, thousands of people applied to host their own Windows launch party. Although reporting at the time suggests that the number was much lower and that many parties were cancelled when guests failed to RSVP.

Tech journalists were confused. PC World wrote that “Hosting a party where you play Dungeons and Dragons or discuss algebraic functions doesn’t make you cool just because you put the word ‘party’ on it.” Gizmodo said the hosts looked like “. . . a guy, his mom, his sister, and his sister’s rebellious college fling that turned into a long term relationship.” The Guardian assured readers that this wasn’t the worst Microsoft ad of all time—there were others. Apple, predictably, launched a new round of “I’m a Mac” videos mocking the Windows 7 party concept.

So what’s the lesson here? For one thing, inauthentic messaging in marketing kills. Most people probably don’t want to host a party for an operating system, and it certainly seems like the actors in this video aren’t into it.

For another, the message is complicated and incoherent. Even if we wanted to host a Windows 7 launch party, this video doesn’t really provide any directions. Except to look up more information elsewhere. Why couldn’t Microsoft just introduce Windows 7 to their audience directly? Why are there all these weird intermittent steps like a video promoting the party idea, a website explaining how to host the party, and then the party itself?

And finally, people just sort of expect stuff like new operating systems to be intuitive and easy to figure out on their own. The days of hour-long instructional sessions are over. Right, Jennifer Aniston and Matthew Perry?