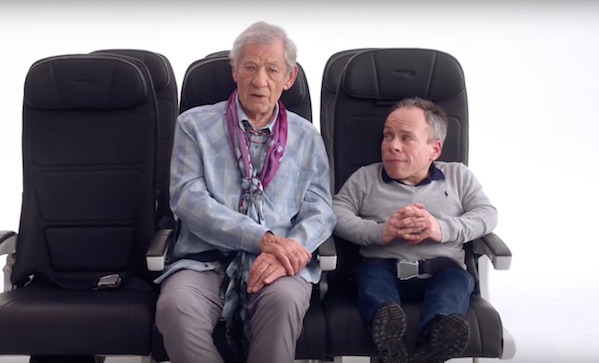 British Airways breaks out the celebrities.

This month, there was a Game of Thrones marathon you could watch by running a marathon, Kingsman got animated Archer-style, and British Airways got a tonne of attention on social media through a safety video, of all things. It’s been a bit of a British month.

The Game of Thrones Marathon Marathon

Kingsman: The Secret Service is a spy comedy aimed at the young adult audience that surprised audiences in 2014, mainly because it’s pretty good and nobody saw it coming. There’s a sequel on the way in September, so promotion is ramping up. And if you’re a spy comedy, why not get help from another spy comedy? Hence this short scene where Eggsy, protagonist of the Kingsman, meets up with Sterling Archer. It’s also a nice little play at foreshadowing, as the new film will deal with an American spy agency.

You know he’s a comedian with a face made of rubber, but did you know that Jim Carrey is a prolific painter? In fact, check out Jerry Seinfeld’s shock at seeing Carrey’s massive studio (and massive canvases) late in his episode of Comedians in Cars Getting Coffee. That’s sort of Carrey’s problem: it’s surprising to learn that someone very famous for one thing is actually pretty good at another thing. Hence this short documentary by Signature Gallery Group. If you watch it, there’s no doubt that not only is Carrey an accomplished painter, his feelings on the subject run deep. As far as content marketing goes, it’s hard to get more authentic.