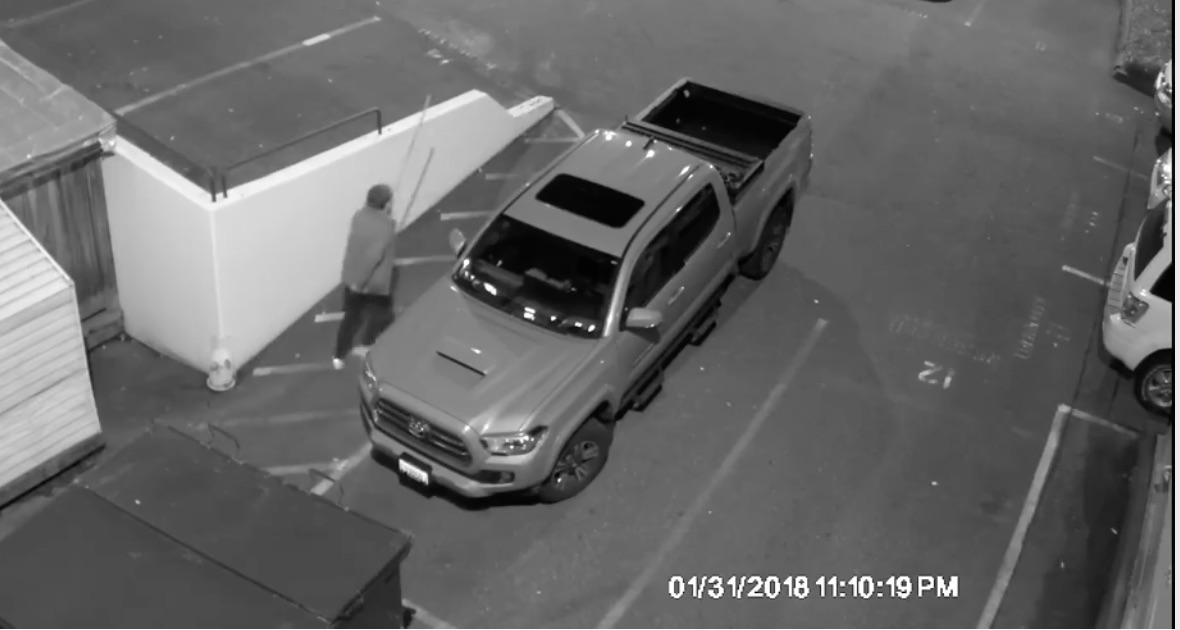 When life gives you a video of a guy trying to break into your truck, you put him on social media.

A surveillance camera at a parking lot belonging to KIRO Radio picked up a vandal trying to break into an employee truck. The next day the Seattle area radio station thought they’d have some fun with it, so they had an on-air radio personality, John Curley, narrate a play-by-play. It’s pretty funny and picked up thousands of views.

Last night we captured surveillance footage of a vandal trying to break in to one of our employee's vehicles in our parking lot. While the suspect is still at large, we took the liberty to have John Curley of The Tom and Curley Show give his play-by-play of the incident.Take a listen ????

This is an example of what we call ‘gifted content’. Sometimes the world gives you a gift. While it isn’t great that some jerk damaged an employee’s truck, KIRO knew that footage of the event was funny and entertaining, so they made it better with resources at hand (John Curley’s play-by-play talents) and released it out into the world. The result is both a surprise and something that didn’t take much effort on their part. Here are a few more examples of gifted content.

The Alamo Drafthouse Turns an Angry Customer Into Content

The Alamo Drafthouse is a movie theatre chain based in Austin, Texas. They are famous for enforcing etiquette in their cinemas. No talking, no infants, no texting—they are not shy about booting you out if you break the rules. So when they kicked out some texting woman back in 2011, they probably thought nothing of it.

But then they received a voicemail from her. An angry voicemail. An angry voicemail lasting nearly two minutes. So, they did what any wise-ass would do: made subtitles and put it on YouTube. Four and a half million views later, people who want to watch a movie without jerks texting know where to go.

Ever wondered how long you could survive in Costco if the zombie apocalypse should arrive while you’re buying a pallet of Funyons? A woman named Sara did, so she took a shot in the dark and emailed Costco, asking how long 12 people could survive a post-apocalyptic situation. Amazingly, Costco emailed back.

A very nice service centre member named Kevin told her that they could do at least 1,248 days on peanut butter alone. The beauty of this response is most large businesses get weird questions and requests. In a social media driven world, you can probably count on an interesting or funny response to weird questions to be posted somewhere.

A Three-Year-Old Gets Tiger Bread Renamed

In 2011, a three-year-old named Lily Robinson in the UK wrote to Sainsbury’s, a supermarket, asking why tiger bread isn’t called giraffe bread. Which is a fair point.

Well, Lily’s mother posted the letter to her blog. It went viral on Twitter.

Then, Sainsbury’s wrote back, saying her suggestion was a brilliant idea, writing, “it looks much more like the blotches on a giraffe than the stripes on a tiger, doesn’t it?”

The blog post with the response letter went even more viral and Sainsbury’s capitalised on the opportunity by officially renaming tiger bread to giraffe bread.

Sainsbury’s got a tonne of exposure on social media on the back of this tiger bread / giraffe bread thing, and they didn’t have to do much. A three-year-old girl and her blogging mother did most of the work. Sometimes, you get a gift.