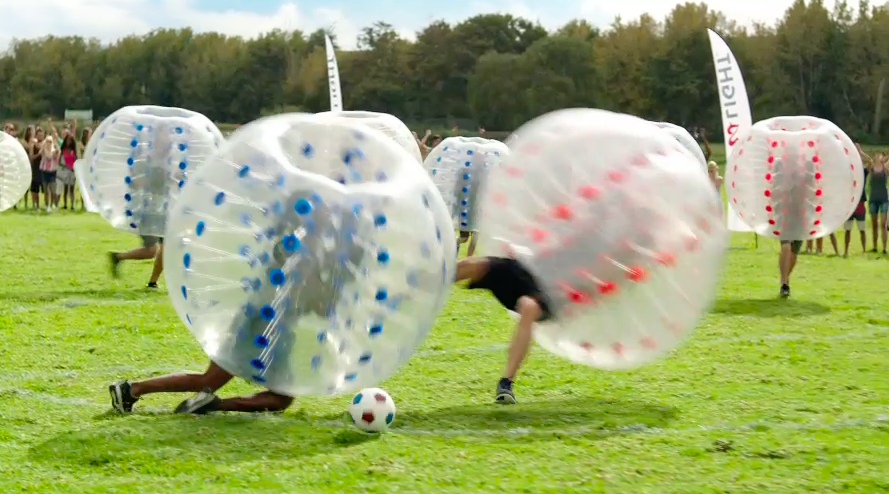 Riding a barstool last Thursday, I looked up the TVs and saw something curious: next to ballgame and soccer, there were a bunch of chubby guys playing giant beer pong. What the hell?

It was the Coors Light Backyard Games, on TSN. Shot just like a regular athletic tournament, a bunch of Coors drinkers were playing giant beer pong, smashing into each other wearing zorb balls, and hurling down waterslides, all surrounded by cheering models wearing Coors shirts.

Basically, an hour plus of great content marketing. And as far as content, goes, it’s largely user-generated, perhaps the toughest kind of content get right. So how’d they do it?

Most big breweries offer a big summer promotion where you have to buy a bunch of their products in the chance of winning a golden ticket of some kind, which gets you into a big summer party. That part isn’t so innovative—but it sets the stage for what comes next.

Given that Coors always does a promotion and the prize is a sweet party, all they needed to do to create their content was a) bring cameras and b) partner with TSN. Coors customers were already enthusiastically participating.  Coors just needed to turn the success of their promotion into more success by filming what they already do and turning it into content—after all, user-generated content is valuable, but only when done well.

It’s worth unpacking this a bit. User-generated content is tough to do, largely because so much can go wrong. Too often, brands embarrass themselves by thinking their users are chomping at the bit to do their bidding and create awesome, shareable content for free.  More though, users don’t participate in great enough numbers. They sometimes turn on the brand.  The content they generate might be dull, or just plin bad.

So how did Coors navigate those rough shoals? First of all, the contest is an annual event allowing Coors to build on last year’s numbers and successes. Secondly, this kind of “bro-content” existed long before the actual content marketing. Essentially, they mitigated the risk of user apathy before putting more money on content marketing. Finally, they invited more winners than they had screen time for. If you’re going for user-generated content, it’s best to generate a lot of it and then choose what makes the final cut yourself.

A fellow bar patron pointed out a friend of hers on the TV. Coors actually did a bunch of regional backyard games, a) ensuring that they’d get winners from across the country and b) ensuring that they’d have a built-in audience of people interested. On top of that, they emphasised the ‘amateur’ nature of the sports by including things like bubble soccer and volley pong. One of the big draws in watching sports is the feeling that you could do what the athletes do—although in this case, that’s probably true.