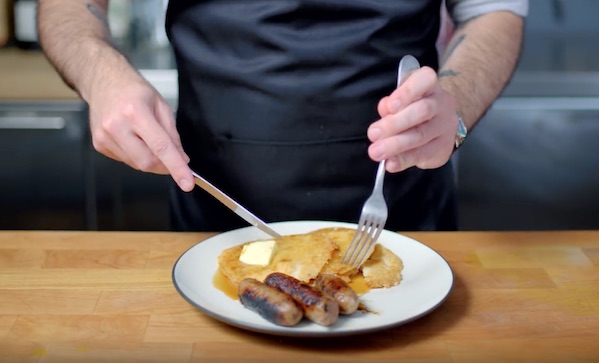 This month in content marketing, we get a little weird. First, a disgusting museum exhibit in London inspired a livestream. Next, we’re talking earned media. What kind of earned media? A sad car review and pancakes inspired by a TV show. Trust us, this’ll be great.

The Museum of London Livestreams a Fatberg

A fatberg is a mass of fats, toilet paper, and non-flushables like wet wipes that congeals together in a sewer system. Last year, the Whitechapel Fatberg in London made the news due to the fact that it was 250 meters long and weighed in at 130 tonnes.

Since museums collect artifacts of our time, the Museum of London acquired a piece and put it on display. To promote their new exhibit on urban development in London, they decided to livestream their piece of fatberg. As far as content marketing goes, this is gross but clever, and it certainly got our attention. Sadly the livestream has ended, but you can read more here.

We almost never highlight earned media in our content marketing roundup. Partly it’s an oversight on our part but partly it’s because there aren’t often great examples. However, this dude’s review of the 2018 Chrysler Pacifica Hybrid is a hilarious exception. Why? Well, he keeps calling it the 2018 Chrysler Emasculator Hybrid. Basically, all the humour in this review comes from the fact that the reviewer, Ben, feels like an over-the-hill loser who used to do fun stuff and listen to Fugazi. Now he drives a minivan.

As far as earned media goes, this review is both funny and relatively positive. It has viral potential. Presumably, Chrysler hasn’t embraced it because it pokes fun at minivans and the type of people who buy minivans. But embracing this review, or, at least, responding to it would be a legendary move on Chrysler’s part. Chrysler, if you’re reading this, get Fugazi back together and make them do something like carpool karaoke in one of your Emasculators Hybrids.

And in the spirit of highlighting earned media, let’s talk about Binging With Babish. The YouTube sensation, created by filmmaker Andrew Rea, recreates food from movies and TV shows. We’ve actually talked about the channel before.

What we haven’t done is discussed the channel in terms of earned media. You see, Rea recreates food from TV shows like The Sopranos, Adventure Time, and Arrested Development, plus movies like Chef, The Avengers, and Coco. Those media properties earn all kinds of media, but stuff like this is different from the other earned media they get and of extremely high quality. If you’re a smart PR attached to these properties, you retweet this stuff or feature it on an official Facebook page. Or, if you’re less smart, you ignore it.

Which provokes the question: who ignores good earned media?