Three content marketing lessons from the marketers behind the TV show Archer.

Obviously plenty of actors and other people shilling their content appear on talk shows like Conan. But Archer is an animated character, so an “appearance” on Conan is a planned and scripted piece of content.

Archer and the gang appear in plenty (we’d guess around twenty or so) of short videos promoting their brand, so here’s one of the best ones. Note that it isn’t enough for the cast and crew of Archer that they appear at a Comic-Con panel, they also promoted the hell out of it with this pop-culture laden short.

In season five, Cheryl changed her name to Cherlene and became an outlaw country singer. So series creator Adam Reed decided to create and drop an album. Fans expecting something jokey or silly were instead treated to an honest and pretty good outlaw country album. It received positive reviews from professional critics and listeners alike.

“Lying is like 95% of what I do. But believe me: in this book, I’ll let you know exactly how to become a master spy just like me.”

Archer’s book, How to Archer: The Ultimate Guide to Espionage and Style and Women and Also Cocktails Ever Written, which is presented as being written by the character himself, is something like a mash-up between the Worst-Case Scenario book series, a cocktail manual, and a deeply sarcastic copy of GQ. It’s extremely funny, surprisingly informative, and definitely builds the brand.

In 2014 one of the biggest controversies in the entertainment world was the celebrity phone hacking scandal, so Archer producers weighed in by ‘leaking’ hacked images from Pam Poovey’s phone. Images NSFW.

The Women of Archer Get Featured in Sports Illustrated

Every year, the biggest selling issue of Sports Illustrated is the swimsuit edition, and in the 2016 edition, readers were treated some fictional characters alongside Kate Upton and Kathy Ireland. Lana Kane, Cheryl Tunt, and Pam Poovey all got the SwimDaily treatment, and Pam Poovey’s “shoot” got featured in the magazine itself.

Archer Gets an App

There are actually two Archer apps out there, but the Archer, P.I. app is the more interesting one. Most TV shows put a hashtag in the bottom right corner of the screen and call it a day. Not Archer. The latest season of Archer saw the show go in a hard-boiled crime direction, so the audience got an app that let them in on the crime-solving fun. With the Archer, P.I. app, users could use the camera on their phone to look at targets on screen and get clues that would help them solve the case that made up the season’s story arc. There were also additional clues hiding in the “real world” and on social media (i.e., the Archer Facebook page, billboards, TV commercials, and more). Users who gathered enough clues and solved puzzles were eligible to win prizes. 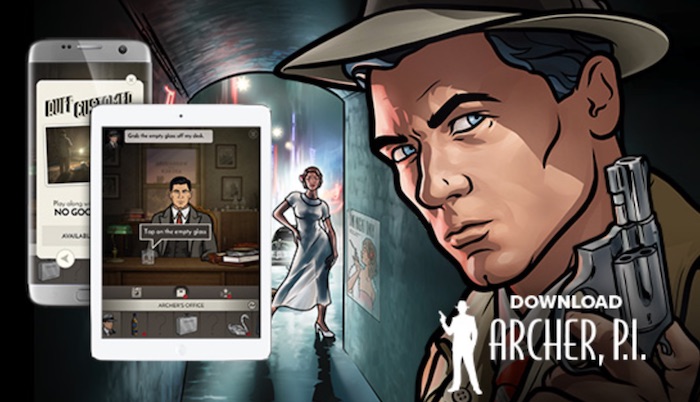