In 2010, KFC created a logo visible from space. Hundred of painted tiles were laid out in the Nevada desert to create the logo, which people could view on Google Earth. In fact, 10,000 people won $1 chicken coupons for spotting the phrase “Finger lickin’ good” in the logo. 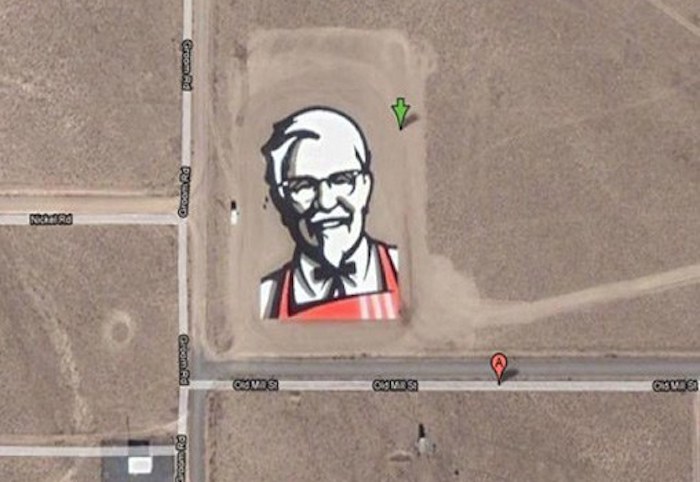 Earlier this year, KFC launched their new Zinger sandwich by literally launching it into the stratosphere. Naturally, the whole stunt was documented in a series of YouTube videos.

Speaking of YouTube, KFC releases a handful of videos every month. This past month, they honoured the return of the Big Chicken monument in Marietta, Georgia (it’s a real thing that just underwent a $2 million dollar renovation), with a five minute animated movie.

To celebrate Mother’s Day, KFC wrote a 96-page romance novel called Tender Wings of Desire that you could freely download on Amazon (although not anymore). Fans of KFC’s Facebook page also had the opportunity to win hardcover copies. Naturally, KFC also made a video.

There’s a lot of content here. And KFC produces it at a fairly fast rate. And it’s highly sharable. However, it just isn’t as successful, in terms of receiving attention, as the weird stuff they make.

Remember, not only does KFC’s weird chicken stuff get a lot of media attention from a wide variety of outlets around the world, it also can’t be directly experienced by their audience. Articles about chicken-flavoured nail polish can get hundreds of thousands of clicks and shares because the idea itself is the funny part. If KFC actually mass produced their chicken-flavoured nail polish, it probably wouldn’t live up to the hype. And the hype is the important part anyway.

By contrast, KFC’s audience can experience the weird chicken content they produce, and mostly, it doesn’t have much impact. It just isn’t that good. Take KFC’s romance novel, Tender Wings of Desire. It currently has 499 reviews on Goodreads, and they’re pretty middling. Turns out, Tender Wings of Desire is a somewhat “serious” historical romance. User Tilly Booth wrote, “I was expecting a book with copious amounts of chicken puns, knights wearing KFC buckets as helmets and well…a lot more steamy romance . . .” while Sh3lly noted, “How can you write a serious story about Colonel Sanders?!”

Here’s the thing: if Tender Wings of Desire was treated just like the weird chicken stuff KFC makes (that is, only a few copies given to a few people in a small market), it would’ve been more successful. Everyone could just imagine chicken puns and KFC buckets on heads and that would be that. Tender Wings of Desire absolutely should have been chicken puns and inappropriately utilized KFC gravy. Then select quotes would’ve gone viral on social media. Maybe Conan O’Brien would get Nick Offerman to read sections on his show.

What we’re saying is: KFC, we’ll write your next historical romance novel. But we insist on inappropriately utilized KFC gravy.