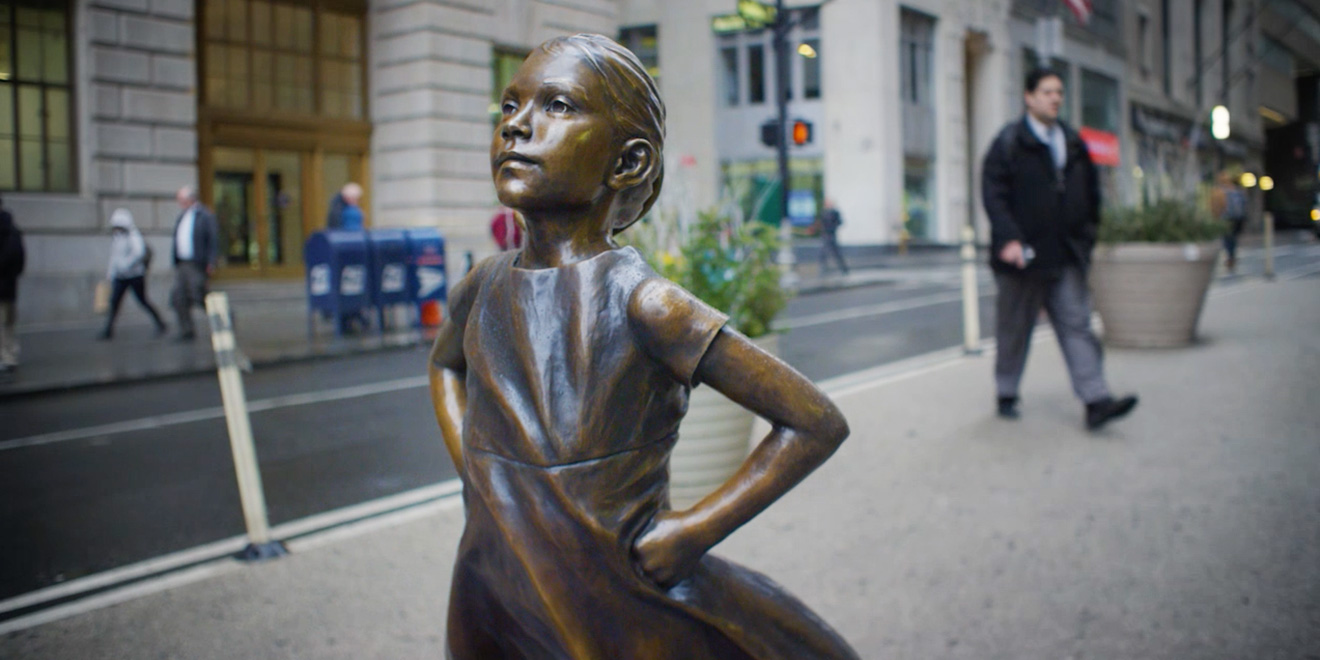 Just in case you were offline on International Women’s Day, here are the broad strokes about Fearless Girl.

A company called State Street Global Advisors, asset managers for $2.5 trillion in wealth, commissioned a bronze statue called Fearless Girl. They put her directly in front of Wall Street’s famous Charging Bull on the eve of International Women’s Day. Lots of people loved the message and are taking pictures with the new statue. Others accused the company of corporate feminism. The artist behind Charging Bull is annoyed that the new statue changes the meaning of his work.

I’m not really interested in hashing out these larger issues related to Fearless Girl. For a definitive read, check out this piece by Russell Smith, who, full disclosure, is working with us on a project. But he’s a terrific writer and you should read his article.

Yes. Art is content, even when artists don’t really like calling it that. Sculptor Kristen Visbal may have made Fearless Girl, but the idea was conceived of by McCann New York, the advertising agency.

More to the point, the purpose of Fearless Girl is narrower than promoting feminism in general. State Street Global Advisors commissioned her in celebration of an index fund they have that is comprised of companies with good gender diversity ratios and higher numbers of women on their boards. The plaque at Fearless Girl’s feet reads: “Know the power of women in leadership. SHE makes a difference.”

SHE, of course, is the symbol for State Street’s SPDR Gender Diversity Index ETF.

But does that make Fearless Girl “corporate feminism”?

I’d say yes to that too. But I’d also imagine that State Street’s response to that is: “So what? We are corporate.”

It’s obnoxious that, of State Street’s leadership team, only five of the twenty-eight are women. But it’s also true that Fearless Girl has struck a major chord with people who think that State Street is on the right track.

It’s true that the digital revolution has driven up the popularity of content marketing. But, I’d argue that content like Fearless Girl doesn’t have to be digital to take advantage of the digital revolution. After all, Fearless Girl has featured in so much user-created content—the #FearlessGirl hastag has over 14,000 posts on Instagram, representing super valuable visual content. The best of it becomes content on major online publishers like Huffington Post. And this is all really marketing for State Street.

And of course, all the debate Fearless Girl has provoked just adds to the reach of her marketing. When she debuted, Fearless Girl got editorial attention from major publications like Fortune, the Boston Globe, and the New York Times. News of her staying longer than her initially scheduled month got coverage from the Toronto Star, the Guardian, BBC, and so much more. People make a point of posing with her and sharing a picture on their social media. What other piece of content marketing has provoked that kind of attention and emotional response?

Besides the Michelin guide?