If you haven’t seen The Man in High Castle, Amazon’s original series, it’s worth checking out. Based on the classic sci-fi novel by Philip K. Dick, it’s in an alternative 1960s America where the Axis won World War II. As we’ve mentioned in the past, Amazon understands the value of content when it comes to marketing. In fact, we’ve argued that Amazon’s content like The Man in High Castle mainly exists to sell Prime. But more on that here. 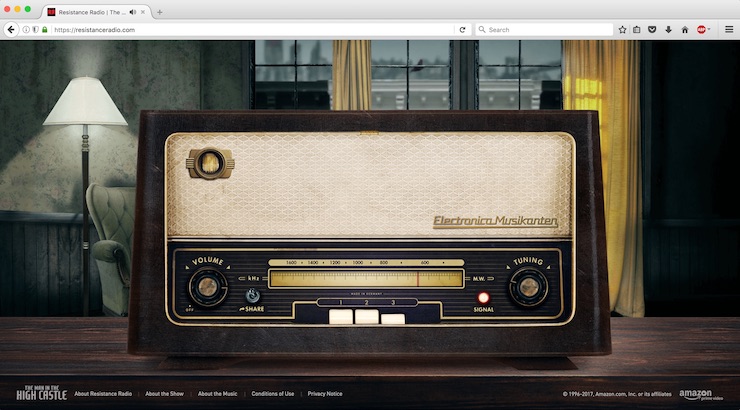 A microsite, Resistance Radio plays radio music from the world of The Man in High Castle, along with shows from in-character DJs. The DJs are as well-written as any characters on the show, and the music is comprised of 1960s hits re-imagined by an eclectic mix of artists like Beck, The Shins, Big Search, Kelis—basically, it’s a good mix of famous names and indie darlings, all produced by Danger Mouse and Sam Cohen. And of course, you can buy the 18-track album. After all, Amazon is serious about their content marketing.

All in all, Resistance Radio is well conceived, well executed content marketing. And this little profile would end there except for a bit of hashtag trouble.

You see, Resistance Radio is also the name of a podcast on the Progressive Radio Network*. And they really, really hate Donald Trump, naturally. As a result, the hashtag #ResistanceRadio on Twitter has become a hot mess.

Conservatives really want to let #ResistanceRadio know that they love the President.

And Liberals are pretty keen to keep up the resistance, no matter the hashtag.

Meanwhile, music lovers just want everyone to know about the many sweet covers offered by #ResistanceRadio.

So what’s our takeaway? Well, most marketing avoids politics, what with the near certainty of pissing off a demographic. #ResistanceRadio isn’t avoiding politics, but it also isn’t engaging . It’s merely taking advantage of a few key words that the fiercely partisan masses on Twitter will throw around with reckless abandon. Frankly, we call that a good move.

*It’s also the name of a well-regarded Star Wars podcast, but this is less relevant to our story, largely because Star Wars fans don’t seem to be as confused as the political partisans of Twitter.