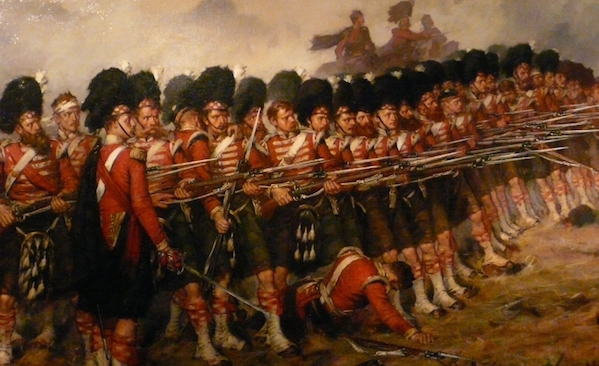 The linear formation was a common tactical arrangement on the 17th and 18th century battlefield. Infantry would form in lines across the field, in ranks two to three deep. Each rank would then fire one after another, advancing as they did (while stepping over fallen comrades in the front rank). The tactic, despite its popularity, had flaws, not the least of which was it had to be conducted on wide and flat terrain where troops were terribly exposed to enemy fire. And it worked best when the opponents fought the same way. So what’s that have to do with social media marketing?

I was reminded of this tactic while looking at the Facebook pages for big Canadian brands like Canadian Tire, Bell and Rogers. Day after day, their community managers bravely post to their Pages only to be massacred with a barrage of negative comments from their followers. More often than not, the comments have nothing to do with the original post. But the managers keep on posting, just like those soldiers of yore who obediently kept on marching into the fire.

Take Canadian Tire. Many posts on this iconic brand’s Facebook page are bombarded with invective from “fans,” mostly complaints about service. To wit, among the many negative comments on a recent post about a deal on exercise equipment was this one: “I haven’t shopped here in 5 years. You guys refused to warranty my socket set case… Please don’t advertise on my wall. It’s traumatic and offensive.”

Or consider Bell. A recent post about the fact that the movie Don Jon (starring that guy from Third Rock from the Sun) was on Bell TV On Demand got about a dozen comments. All negative. And none of them had anything to do with Joseph Gordon-Levitt’s acting chops.

Clearly, the negativity speaks to bigger issues these brands have. The Facebook posts are merely red meat, reminders to customers about just how dissatisfied they are. And they incite return fire.

So what’s a front-line Facebook page manager in this situation to do?

I think the solution is rather simple. Brands need to STFU about themselves in social media. Stop the marketing!

Imagine going to a party. You meet someone new. And the first and only thing that person does is talk about what a fantastic job she did raising her kids. That’s what many brands are doing in social. No wonder it pisses people off.

Proof of my thesis can be found on the Canadian Tire page, of all places. When Canadian Tire stops marketing themselves and instead talks about things that people are interested in, the negativity stops. Recent posts about hockey and maple syrup are great examples of content that connects to the brand’s values AND gets people happily engaged. This kind of engagement builds brand goodwill — and ultimately — business at the check-out.

Perhaps companies need to stop hiring marketers to run their social media? What do you think?