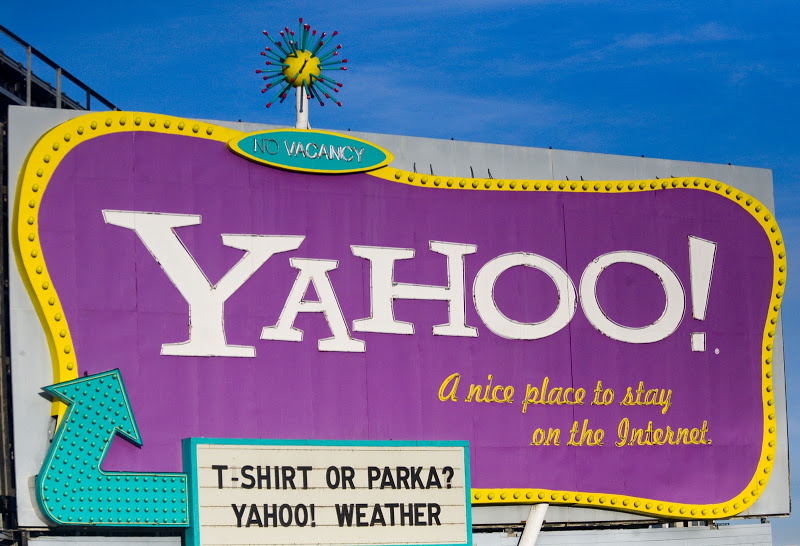 Like the late great Rodney Dangerfield, Yahoo can’t get no respect.

Yes, it’s the fourth largest website on the planet. Yes, it turned impressive financial results this quarter, thanks in part to robust search, mobile and native advertising businesses. Yes, it owns 16% of Alibaba, a company that is almost surely going to grow exponentially in value.

But the investment community continues to hate on it and its charismatic leader, Marissa Mayer. While the stock jumped 10% this week, the digital powerhouse still only has a market capitalization roughly equal to the value of its cash on hand and its Alibaba/Yahoo Japan holdings. That means the market considers Yahoo’s core business, the one that 800 million people use every month, to be essentially worthless.

In fact, up until last week, it was negatively valued. If someone were to buy Yahoo today, they could get the internet portal for less than the price of a cup of coffee. When you consider that Yahoo-owned Tumblr alone is on track to bring in $100 million in revenue next year, this just doesn’t make sense.

But no matter, some investors don’t seem to see a bright future for Yahoo. They say it’s too reliant on display advertising, a business which is growing in terms of the number of ads sold, but more or less stagnant as programmatic buyers force revenue per ad down. They think Mayer is flailing about in search of a long term strategy. They worry she will blow the Alibaba loot on yet another risky start-up.

We, however, are more optimistic about Yahoo. And not just because we’re content marketers, we think that Yahoo’s potential is in content (actually, Mayer has said the same). But for that potential to be realized, someone who can unlock it has to buy Yahoo.

We think that someone is Facebook. Here are three reasons we think this would be a masterstroke for the world’s most important social network:

1. Yahoo is all about content: Its commitment to growing high quality content production is evident with signings of high profile contributors like Bobbi Brown (style), David Pogue (technology) and Katie Couric (news). Meanwhile, Facebook has repeatedly stated that it wants its users to discover high quality content in their News Feeds (recent changes to its News Feed algorithm support this). Facebook could push shareable Yahoo content out to its billion plus monthly users, and in doing so, add value to their experience on the platform. And blow up Yahoo’s page views at the same time.

2. Yahoo is all about content: (Yes, we’re repeating ourselves.) Content marketing is hot these days. But few brands are doing it well. (Just look at most brand pages on Facebook.) This acquisition would give Facebook the opportunity to sell its clients Yahoo’s content development expertise and services across categories like style, entertainment, finance and travel. And with more and better content, those brands are going to want to buy more Facebook ads to promote it.

3. Facebook could fix Yahoo’s advertising problem: The people at Google must be having sleepless nights these days as Facebook’s advertising proposition just keeps getting better and better. The latest coup was the relaunch of Atlas, Facebook’s ad serving platform. Not only does it leverage Facebook’s vast social graph to permit unbelievably precise targeting, it also allows advertisers to target digital campaigns across devices or websites and even connect online behaviour with offline purchases. When it was launched last month it was seen as a threat to Google but also to Yahoo’s own display business. But bringing Atlas to bear on Yahoo’s ad serving business could re-energize it, and add incredible value for advertisers.

No doubt we’ve oversimplified the case. There are at least two significant hurdles Facebook would face with such as acquisition. First, freely distributing owned content on its platform would no doubt raise the hackles of brands paying handsomely to do the same. And second, even after sacking 2,000, bloated Yahoo still has over 10,000 employees, compared to Facebook’s 7,000. When you consider that Whatsapp had about the same number as the average Tim Horton’s franchise, it’s clear Zuckerberg et al would face a huge management challenge.

Facebook could probably acquire Yahoo for a 40% premium on its current share price, meaning it would have to shell out something like $58 billion. Peel off the $10 billion in cash in the bank, and dispose of the Alibaba and Yahoo Japan stakes, and the net cost to Facebook would be only two-thirds the cost of the Whatsapp acquisition.

We think all things considered, that’s a steal.

Disclosure: The author has long positions in both of the companies discussed in this article.