It isn't the best dating sim, but it is the one with the most fried chicken.

As we’ve mentioned, KFC went and made a game calledI Love You, Colonel Sanders! A Finger Lickin’ Good Dating Simulator. It’s free on Steam and you can play it right now. Since you probably won’t, though, we did it for you.

The intro is pretty exciting. Turn an eighties branded toy cartoon into an anime and that’s basically what this is. The music is upbeat, the colours are bright, and images move at a frenetic pace.

My best friend, Miriam. She’s the daughter of two master chefs and once rescued me from a “quicksand box”. She also chipped a tooth on a mannequin while practicing for her first kiss. 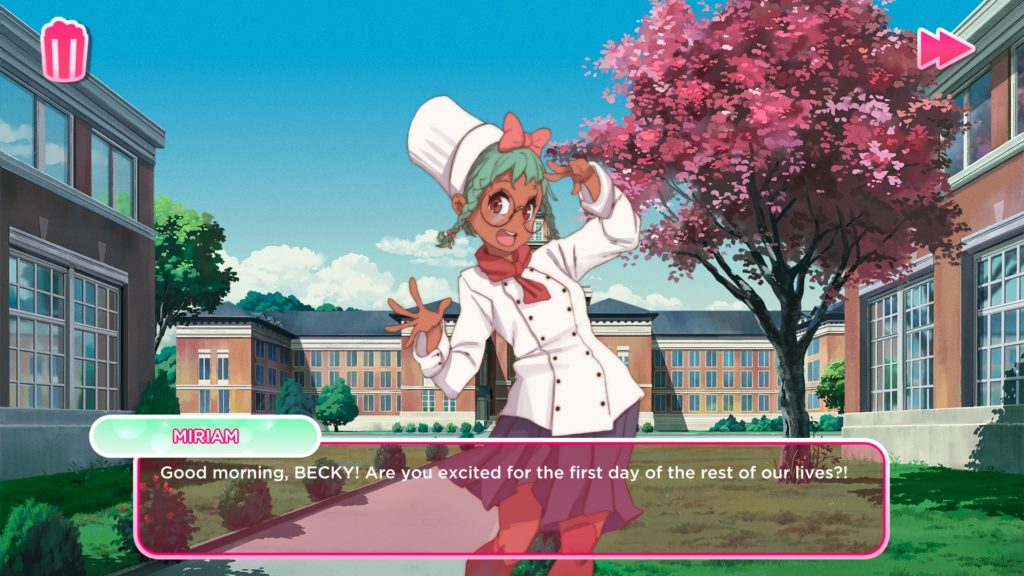 My arch rival, Aeshleigh. You can tell she’s the arch-rival because she spells her name like someone who wants to sell me essential oils. And she calls me chicken shins. Also, her top has a heart-shaped boob window. 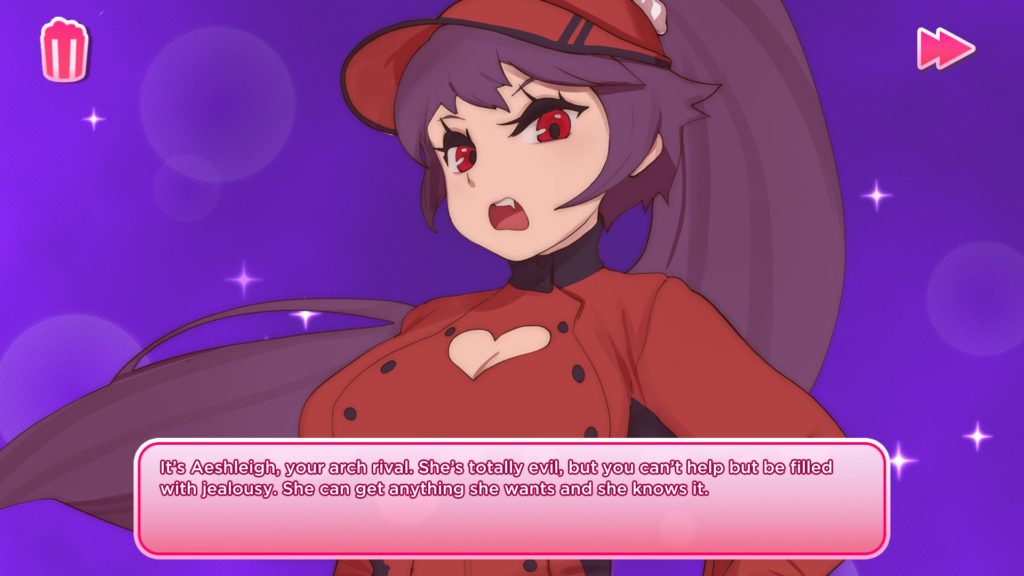 Why is our professor a dog? Shut up, that’s why. 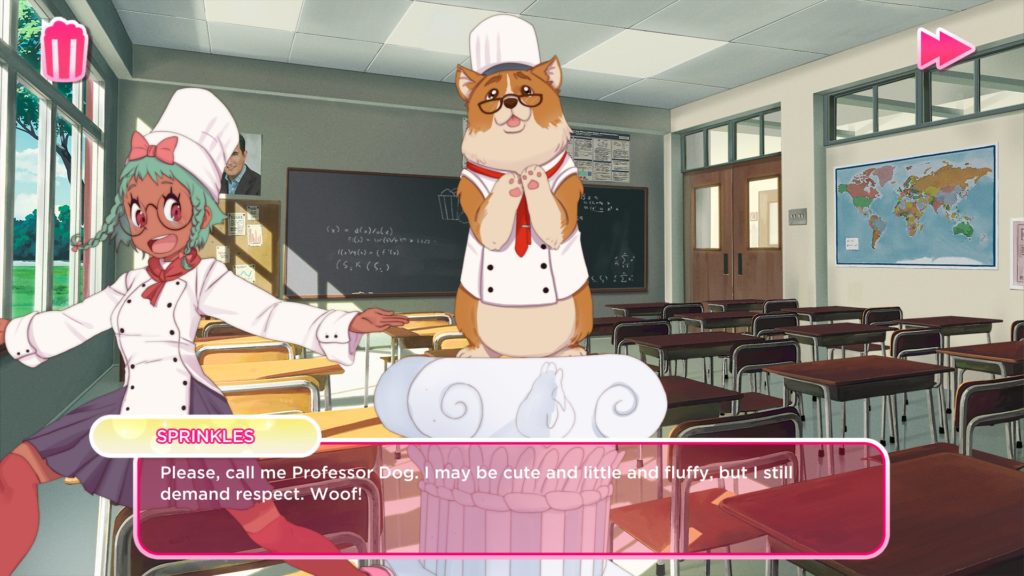 The Colonel’s presence is foretold by a deluge of cherry blossom petals. 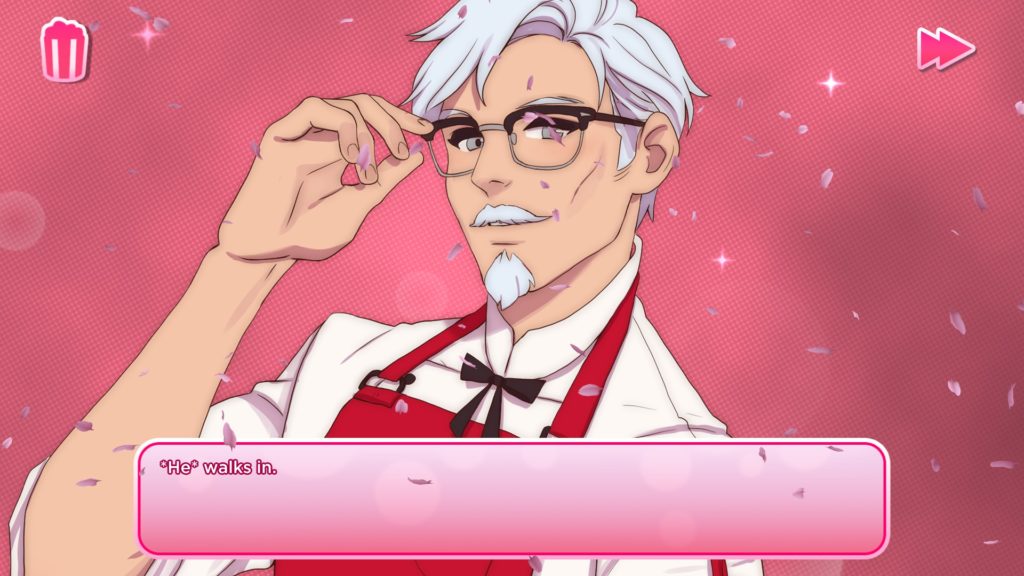 Because I spent the morning daydreaming about my future, I neglect to apply deodorant and now I’m sweating buckets. But dreamboat Colonel Sanders won’t make fun of me for it, he points out that the classroom gets hotter than a Kentucky fryer. 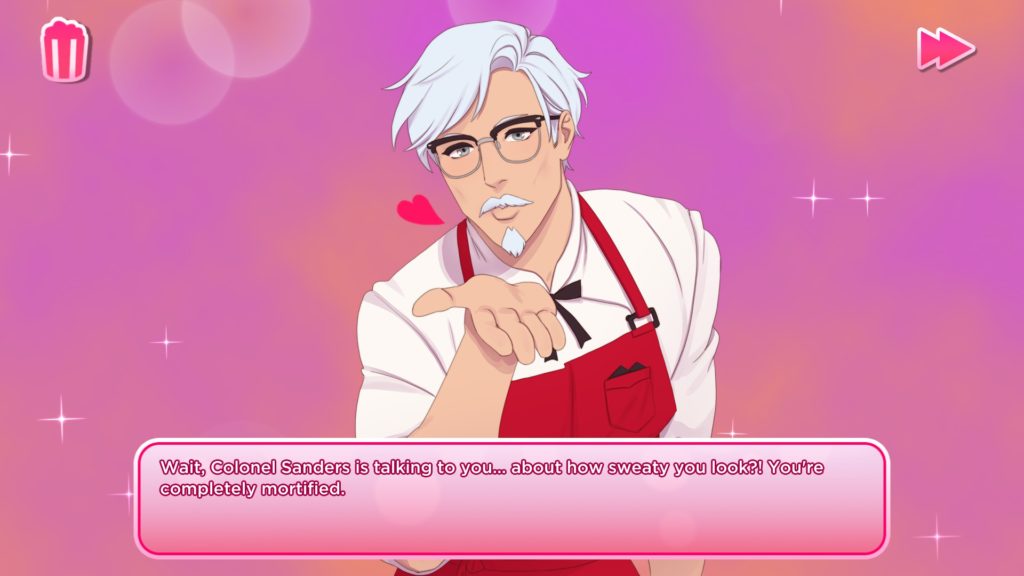 At lunch, the Colonel has made everyone a special lunch in celebration of the new semester. Novelty of novelties: it’s chicken, but in a bucket. And by concentrating hard enough, I can figure out the special secret flavours. 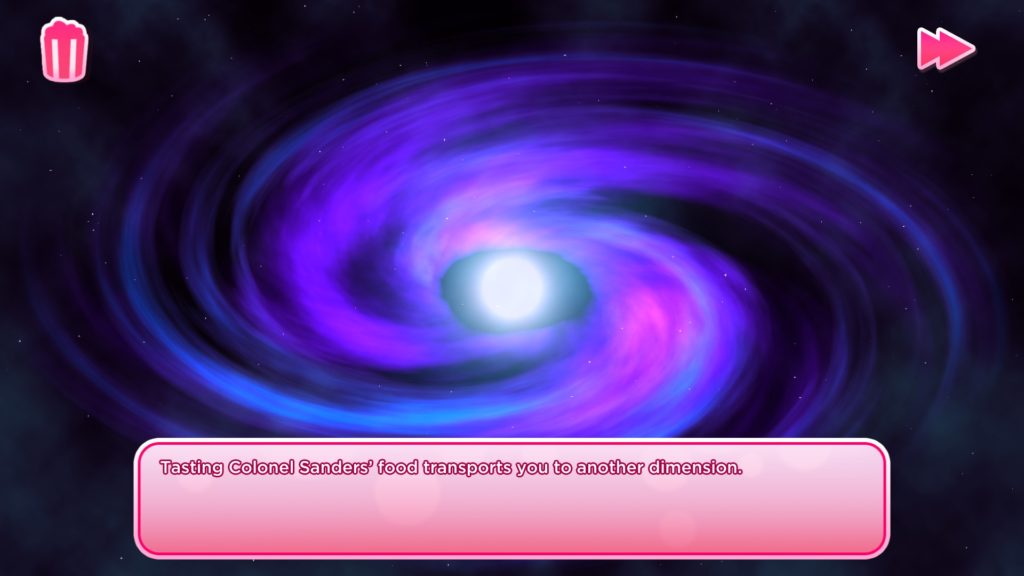 Sadly, choosing the option to neg Colonel Sanders does irreparable damage to our relationship. Then I get a game over. 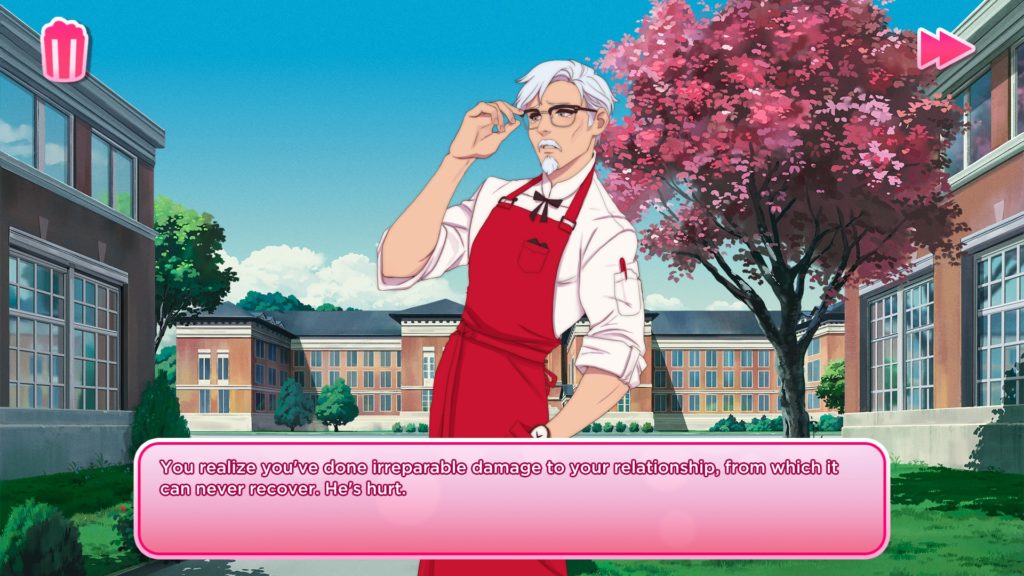 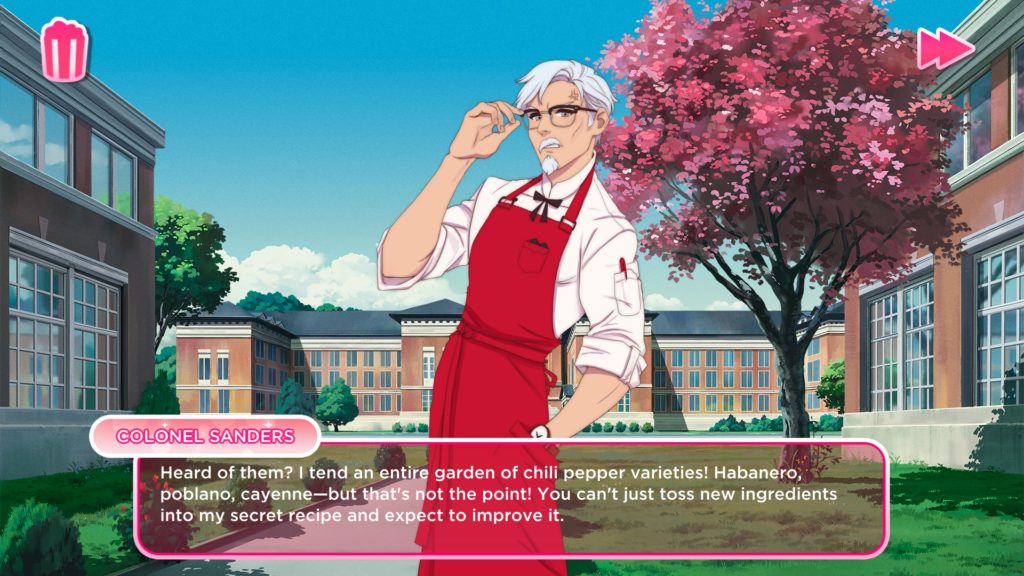 The afternoon’s class will take place in a cooking area. Like Kitchen Stadium. We pair off. Since I’m with Colonel Sanders, Miriam is by herself and crying . . . and I have to choose a partner for her. 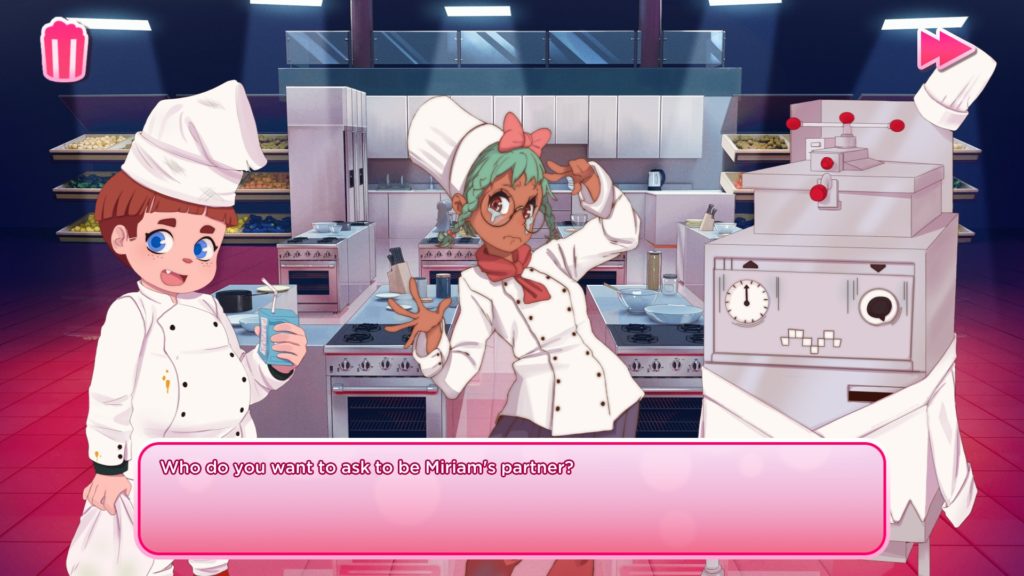 I need to cook something with Sanders . . . and while steak tartare or octopus seem like great choices, somehow, I bet my grandmother’s mashed potatoes and gravy is the right choice. 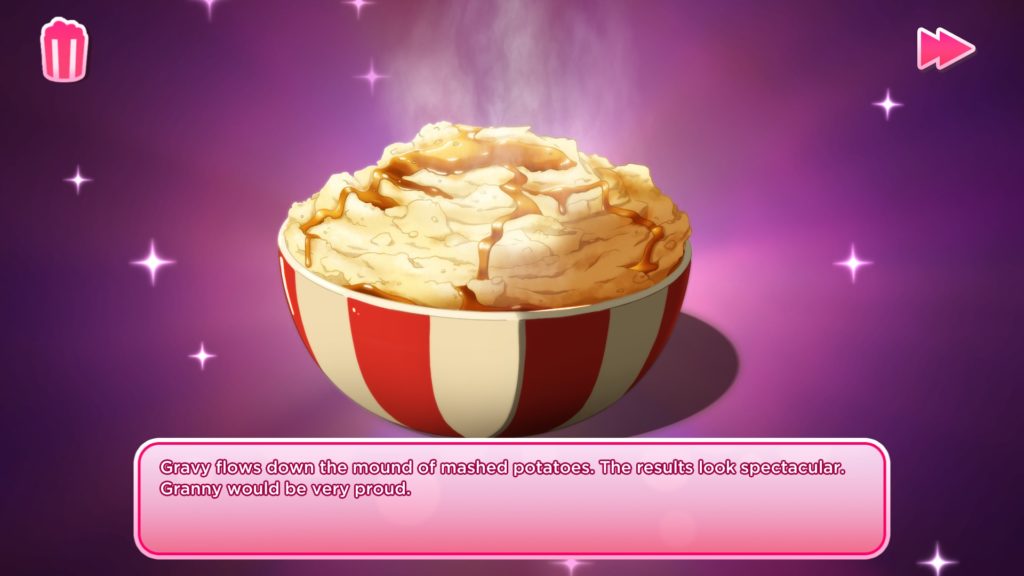 Aeshleigh over here telling Colonel Sanders they fit together like a thigh and drumstick. I can’t even with this girl. Miriam has my back though. Sisters before misters, fool. Colonel Sanders and I make beautiful things together. Like mashed potatoes. Then we reach out and grab the same spork. Also, someone dies when Van Van’s octopus served on a battle axe turns out to be toxic. Who saw that coming?! Sadly, our late night walk in the quad is ruined by Van Van and the spork monster. 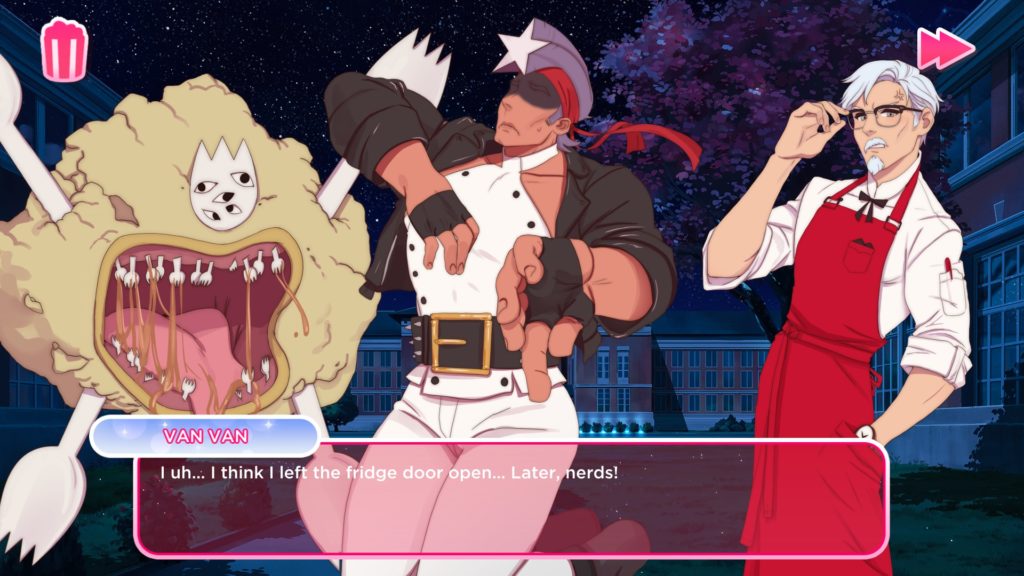 The next day at school has the Colonel show up on a horse. But don’t worry, he knows his way home. And Miriam makes me a tiny lunch. But there’s a battle at lunch. Answering timed questions just doesn’t work when I keep thinking about Colonel Sanders . . . then I lose a hand to a stand mixer. And Aeshleigh made a wicked complicated dessert. Then, by choosing to internalize my rage instead of getting between Aeshleigh and Colonel Sanders, I cause my eyebrows to burst into flames. So there’s that. But it’s okay, I get invited back to Colonel Sanders house, where I show him my special coleslaw recipe. Oh, and I can tap on things around the house to learn more about him. Then I get a game over once more when I try to make a move on Colonel Sanders while wearing one of his signature white jackets. The next day, I’m given the chance to use a memory-erasing spell from a dark magic book to erase my memory of Colonel Sanders so I can focus on exams required to pass cooking school. As one does. It takes forever to cast the spell, since I keep forgetting what I’m doing. Oh, and casting the spell erases all game progress and sends me back to the beginning of the game. So there’s that. Additional fun fact: getting between Colonel Sanders and Aeshleigh instead of having my eyebrows set on fire earns me another game over. After replaying all that, I finally get to the final cooking exam, which goes badly until Colonel Sanders joins forces with me. We work together like fried chicken and macaroni and cheese . . . in one big bowl. Naturally, the game ends with a school dance. And Colonel Sanders asks me to dance with him. Victory? Yes.

Clocking in at about an hour, I Love Your, Colonel Sanders is pretty funny. It grossly exaggerates dating sim tropes, shows the amount of self-awareness we expect from content marketing, and is utterly shameless in promoting KFC’s food. We like the jokes, the number of ways to get a game over, the art, the music, and the overall absurdity that fits in with KFC’s other content.

That said, this was sort of the minimum we’d expect from a game. It’s basically a short dialogue tree with very few options. There are dating sims like that, but even dating sims that are only dialogue trees tend to be a little more complex. And of course, plenty of dating sims have more gameplay. For example, your character might visit the gym to build a strength stat, or visit a bar to build a charisma stat. These stats are then relevant when going on dates or talking to datable characters.

Basically, there is some room for improvement to turn the game into more of a game. There was a point-and-click section at the Colonel’s house that could have been a mechanic used throughout the game. Or there could have been more fight sections, with fight mechanics that made sense. At a minimum, more complex, and more consequential dialogue would’ve been better. As the game is, the only real consequence to not selecting the ideal dialogue choices each time is you don’t get the secret ending, merely the good ending. If dialogue choices unlocked branching plots, there’d be more potential jokes and replay value.

All that said, I Love You, Colonel Sanders! A Finger Lickin’ Good Dating Simulator s pretty good content marketing. We thought there’d be more to it, but we hope to see more stuff like it. If you play it, we recommend doing so with a group of people who can turn it into a drinking game of some kind.